Why we love Maura 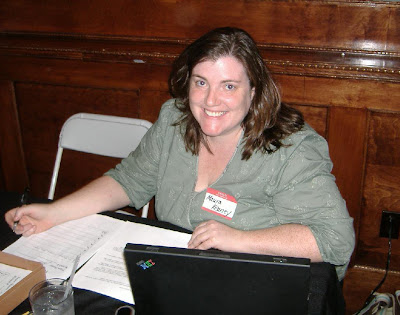 There's been quite a bit of discussion about Maura Keaney stepping down as manager of Jim Himes's campaign, so I think it's about time to address it here.

Maura is still with the campaign in a senior adviser's role. Read this quote pulled from an article in today's CT Post:

In a major shake-up at the top of his organization, Democratic congressional hopeful Jim Himes has replaced his campaign manager with a veteran party operative who has been the architect of several other high-profile bids for political office.

Dana Houle, 43, a former chief of staff to U.S. Rep. Paul Hodes, D-N.H., and manager of his 2006 re-election campaign, took charge of the operation last week, a spokesman for Himes said Tuesday.

Maura Keaney, 37, who had been working with Himes since he announced his candidacy last year, is out as campaign manager but is staying on the team as a senior adviser.

"This was a way to take us to the next level where we need to be for the next two months," said Michael Sachse of the Himes campaign.

The move, Sachse said, was not intended to be an indictment of Keaney's work as campaign manager.

"Maura has done an amazing job, and it's no accident that, thanks to her work, that this is a targeted race and Jim is viewed as one of the top Democratic challengers in the country," Sachse said. "There's always a concern about appearances, but the truth is this was done amicably. Maura brought Dana in. This is a move we all feel that puts Jim in the strongest possible position to win, and that's what everyone wants."

In my limited experience writing about politics, I've seen a number of moves that surprised me. This is one of those times. Maura's as committed a Democrat and as determined an activist as I've ever met.

I was personally thrilled to hear she was tasked with managing Jim's campaign. Even though she never ran a campaign before, I was pleased with the decision to hire her. Maura helped bring Jim into the spotlight from near total obscurity in about six months; practically nobody outside of Greenwich had ever heard of Jim Himes before Maura started working with him.

But apparently the powers that be wanted someone with some previous experience in winning campaigns to lead the way into the stretch. And this being what the DCCC feels is a huge election, someone decided to make some moves. Knocking off a 21-year incumbent isn't an easy task by any means, and Maura has done an amazing job getting Jim set up to go through the home stretch to a November victory. There's no doubt in my mind that without Maura, the campaign would have never had the exposure and success it's experienced so far.

And to show what a terrific person Maura is, just read this quote from the same article:

"I've been pitching now for eight innings, and I've recruited an experienced closer who has got a fresh arm and a history of winning similar contests who will take us to a win on election night," Keaney said. "We've always believed this is going to be a really close election, and we've made tremendous progress since I joined the campaign last April, when we had no money and no name recognition."

Dana Houle has a tremendous resume and awesome blogging credentials. I'm looking forward to meeting him very much and hearing about his vision for the final stretch.

But I do know this to be true...when Jim is sworn into office in January, Maura Keaney will be the single most important reason it happened. Her endless energy and commitment to the cause makes her a prime example of how to be a progressive activist.

But her warmth, humor, and positive attitude are what we all love about her. 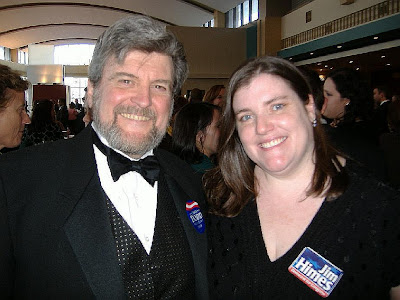 This post is one of your best, Bob - because the subject is so very classy.

I hope the Himes Campaign is not forgetting Bridgeport. It will decide if he wins or not

anon - no, Jim is very involved in Bpt. Did you catch his press conference a couple weeks ago with members of the Bpt. City Council about the Congress St. Bridge that Chris Shays angrily crashed?

Jim's campaign is headquartered in Bridgeport! He spends most of the day in Bridgeport from what I've seen. So no way he's forgetting Bridgeport.

(Which is thanks to Maura for making that decision!)

Maura is the only reason anyone in Fairfield County even knows who Jim Himes is. Maura is a force in CT Politics and if Jim wins, she's due most to all of the credit.

Does this mean she can start blogging again at MyLeftNutmeg? She is great.

Gutsy Maura has been one of my heroes for a long time. Running a Congressional Campaign as your first experience... what a great accomplishment! Once he is in congress, if Hims ever strays even just a little bit from his progressive agenda, I'm sure Maura will be right there to pull his ear!