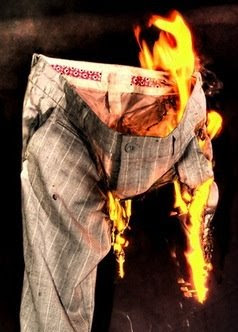 From a CNN.com report on the Democratic reaction to Joe Lieberman's speech last night.

Democrats accused fellow lawmaker Sen. Joe Lieberman of misleading the Republican National Convention when he addressed them in a speech Tuesday night.

"Joe Lieberman ought to be ashamed of himself for some of the things he said tonight, not as a Democrat but as an American," adviser Robert Gibbs said on "Larry King Live."

Gibbs stressed that it was a "flat-out lie" that Obama hasn't reached across party lines during his time in public office. Gibbs cited Obama's work with Sen. Richard Lugar, R-Indiana, to keep nuclear weapons out of the hands of terrorists and with Sen. Tom Coburn, R-Oklahoma, on the government budget.

Gibbs blamed what he called lies like those perpetrated in Lieberman's speech for disillusioning voters and making them cynical of the government....

There it is. Most politicians hate it when their name is associated to BIG FAT LIES repeatedly in a major news story. So this must suck for him.

We now have it on the record: Joe Lieberman is officially confirmed by CNN ("The most trusted name in news") as being "a big stupid liar-liar pants on fire!"

(CT Bob: Strictly speaking, this is not a completely accurate quote, but you get the idea)

The irony about Joe Lieberman these days is that he's finally starting to realize that this isn't his old Democratic Party he's used to dealing with. He left us just as we started to push back and take charge. In the annals of "bad timing" this one is going to be remembered as a doozy!

Hey, why don't we start a pool:

Guess how many times McCain mentions Little Bush in his acceptance speech!