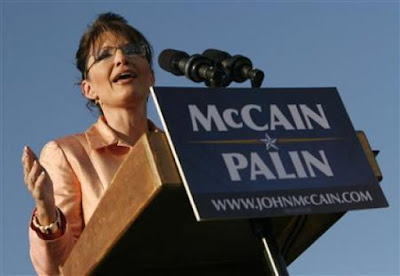 It's getting worse for Ms. Palin every day. The MSM has picked up the loose threads of her various issues, and they're digging hard. How long before she either a) withdraws because of "family issues", or b) is unceremoniously dumped by McCain and the GOP?

I was giving odds (3-1 at last estimate) but a metaphorical death watch seems more appropriate. It's not whether it's going to happen, but when? I say 9/7/08 is going to be the day.

Over on FDL they've started a "Sarah Palin Goodbye Watch", but really, shouldn't it be called a figurative "death watch"? Because her political ambitions are going to expire well before their time (which would have been November 4th anyway). Here's a quote from FDL commenter Hugh:

This is what I currently have on Palin.

Troopergate/ currently ducking a deposition under oath
Replaced the guy she fired in troopergate with someone with a sexual harassment complaint who lasted 2 weeks
Alaska Independence Party
Used a state site to promote mining interests over clean water.
Bridge to nowhere being for it before she was against
For earmarks before she was against them
Firing or threatening to fire employees as mayor over loyalty issues
Involved in the 527 for Ted Stevens
Her daughter’s pregnancy
Her own still dubious pregnancy/flying 3000 miles after her water broke
Her expensive screwup with building a rec center as mayor
Anti-choice
Anti-gay marriage
Pro-abstinence only (Tell that one to Bristol)
Pro-gun
Anti-environment (wolves and polar bears)
Pro-drilling
Anti-global warming
Creationist/wants it taught in schools

Listen, I feel for the gal. Even though I hate her Creationist, anti-Choice, anti-Sex Ed, pro-big oil politics, she almost seems to be a victim of unlucky circumstance.

You see, she had the inordinate bad luck to be chosen as John McCain's running mate way too soon in her career. She really needed a lot more seasoning before she was ready to be served. I'm sure by Alaska's standards she's a great leader, but consider that they have a history of repeatedly electing Ted Stevens.

Palin might have become a powerful ultra-right Republican if she'd had better luck. But after this debacle finally wraps up, she'll be regarded with less respect than even Dan Quayle.

It's too bad for her. But ultimately, even in a non-lethal war of political ideologies, there's going to be some collateral damage. Sarah will be remembered as a tragic footnote in Republican history.

And then, of course, we'll have Joe Lieberman to kick around once more.

UPDATE: Via the HuffPo, here's the latest odds:

As of Tuesday night, Intrade, the political futures market, was offering gamblers convinced that Palin will withdraw 8.3-to-1 odds: that anyone betting $12 dollars that Palin would be off the ticket before November 4 would get $100 back if they were proved right.

After some thought, I honestly don't think either her withdrawal or ejection is currently likely (even though either is advisable):

a) McCain, like Bush, is too stubborn to admit he or his people goofed; they'd rather slog it out & to hell with the consequences;

b) Palin is too new to understand the damages being wrought by these thousands of little knife cuts.

Thus - barring the uncovering of some moose-sex scandal -- My Time of Death is Nov 4th.

Yes, that's the point. If enough of us start calling for her to drop out, McCain's stubbornness will kick in and he'll stick with her. And then the rest of the campaign will be dogged by issues like "troopergate".

The GOP is swiftboating themselves with this pick. It couldn't be better for the Dems.

I was thinking of doing that when I snagged part of your post.

Done! Thanks for the idea, dude!

Will Joe stand shivva, if she goes, is my question.

Guys Guys Guys. You don't hand out with enough Republicans. The Local ones are vocal...for my benefit, it seems. They are leading loud one-way discussions with other (stunned-looking) Republicans and Unaffiliateds with the intention that I overhear their conversations. "I just *looooove* that Sarah Palin!" "Don't you *looooovvve* Sarah Palin?" and of course "Isn't Sarah Palin just *wooooonnnnnnderfulllll*"

I don't see any reason why she would withdraw from the ticket - most of what you're citing there are policy differences you have with her.

She gave a stunning acceptance speech that beat out Biden in the ratings and came close to catching the numbers Obama's speech drew in! There's clear interest in learning more about her, and Republicans are very excited about her candidacy.

The Obama campaign hasn't figured out how to respond to her yet.