"No blank check" for Wall St. 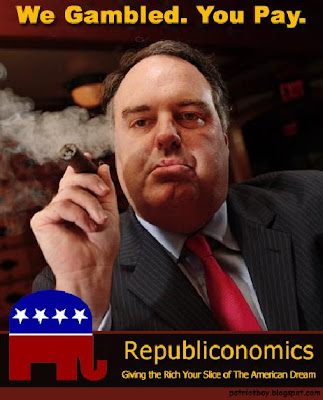 (h/t to Patriotboy for the image)

Barack Obama said yesterday that there should be "no blank check for Wall Street..." in regard to the proposed $700 billion bailout.

"As of now, the Bush Administration has only offered a concept with a staggering price tag, not a plan," he told a crowd estimated at more than 25,000 people. "Even if the U.S. Treasury recovers some or most of its investment over time, this initial outlay of up to $700 billion is sobering. And in return for their support, the American people must be assured that the deal reflects the basic principles of transparency and fairness and reform."

I have absolutely no doubt that Wall Street financiers are looking at this nearly three-quarters of a TRILLION(!) dollar bailout as perhaps the last golden opportunity of the Bush administration to steal massive amounts of money from the American taxpayers with no oversight at all.

And the cry of "partisan politics" will erupt from the GOP if lawmakers make ANY attempt whatsoever to protect the taxpayer's investment in America's economic stability.

Over the next several days we're going to see a dramatic test of the Democratic majority Congress's ability to hold the Bush administration's powers in check. If Treasury Secretary Hank Paulson has his way, we'll hand him a $700 million dollar check made out to "CASH".
Posted by CT Bob at 9/22/2008 10:18:00 AM

Your blog makes some good points ... the lead graphic: not so much. Facts are that the deregulation of Wall Street and greed that birthed our financial crisis is fairly owned by BOTH parties ... and trying to blame it all on the Republicans is no better than the baseless "repeat the lies to make them true" tactics on the right. (The repeal of the Glass-Steagal Act, correctly reported as an error spearheaded by Phil Graham et al, was happily signed into law by Bill Clinton and overwhelmingly supported on both sides of the aisle.)

I'll concede that both parties share the blame on this mess.

But the general lack of leadership and accountability from the top for the last 8 years certainly helped bring about this "crisis", and the solution is clearly something we'll have to watch carefully to make sure it doesn't become just another corporate money grab.

The details of how to rectify this situation so all involved (not those high rollers) see some semblance of equity makes my brain explode! My main worry is that the Dems will cave.

I'm sure the Dems will cave, but it remains to be seen if it will be just a minor collapse or a "Sago Mine Disaster".

Hopefully we'll get at least SOME oversight and guarantees for our tax dollars.

Let it crash! Le this be the death knell of ALL capitalists.