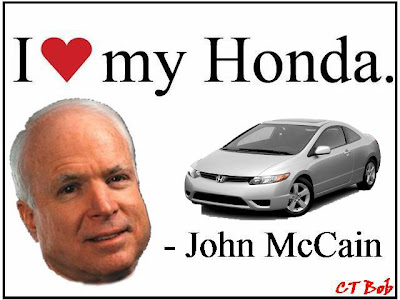 Maybe he'll pander to the redneck crowd by putting one on cinder blocks in the front yard of each of his houses...

Yeah, nobody has checked into how many trailers he owns (including double-wides)!

whats the cutoff for too many cars? ned lamont had 5. i think we need to set a specific number so we dont get accused of flip flopping

The difference is, McCain's campaign is trying to stick the "elitist" label on single-car and single-home owner Barack Obama. While McCain owns how many cars and houses?

I swear, you wingnuts don't even pay attention!

"Elitism" is a right wing euphemism (note to the GOP: look it up) for "making America THINK".