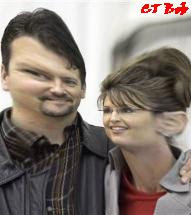 While Todd Palin and 12 others from Sarah Palin's administration have been subpoenaed to testify about "troopergate", the star witness and prime suspect of the investigation (the governor herself) has been allowed to skate.

Oh, did I mention that the prosecutor tasked with the final decision about the subpoenas happens to be a Republican? From the Associated Press:

(AP reporter Gene) Johnson quotes retired prosecutor (and special prosecutor for this investigation) Stephen Branchflower saying of Todd Palin: "He's such a central figure. ... I think one should be issued for him."

He adds that Branchflower "said he wants to interview Palin herself, but did not ask for a subpoena for her."

Of course not. Their strategy is obvious - don't put Saint Sarah on the stand until AFTER the November election. If John Sidney McCain wins the election, it'll be fairly easy for the Republican dominated Justice Department to allow the Alaskan probe into Palin die a quiet death.

And we'll be stuck with McCain until he croaks (probably a matter of months), and then it's President Palin.

The consequences of a complete dilettante like Palin sitting in the Oval Office will make George Bush's administration look like a stunning success in comparison.

Another thing to consider here is that all this noise about Sarah Palin is moving critical examination of McCain's policies into the background. The media need to remember that Palin is simply the "shiny object" being used to distract them. While it's good to see that the media's honeymoon with Palin is finally over, we need to keep the focus on the person at the top of the ticket:

What to do with Todd? Will he continue to involve himself in his wife's work, as he does in Alaska?
Will he need a ultra-top level security clearance? Does Lynne Cheney have one?
See this link for background on Todd:
http://www.andrewhalcro.com/shadow_governor
This whole site is a treasure mine of Palin related doings.
oldswede