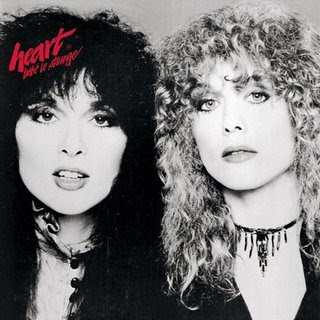 The original Wilson sisters, Ann and Nancy Wilson (for whom I'll admit to having had an adolescent crush on more than thirty years ago) have objected to the GOP's use of their hit song Barracuda when introducing VP candidate Sarah Palin to the RNC. Their band Heart is attempting to get the Republicans to stop using the song as it goes against their political leanings.

Rock band Heart have called in lawyers after US vice-presidential candidate Sarah Palin used their track Barracuda at a Republican Party rally.

Singers Ann and Nancy Wilson said a cease-and-desist letter had been sent to the party asking it not to use the song, a US hit in 1977.

"The Republican campaign did not ask for permission, nor would they have been granted permission," they said.

While the GOP paid all necessary licensing fees and technically have permission to play the song, it seems to go against the grain to have them use a rock and roll song, especially considering how the Republicans are much more comfortable with Country music than Straight On Rock!

If they like "Heart" so much, maybe they should just stick with Achy Breaky Heart...that seems a bit more their speed.

I'm sure the Wilson sisters would be much more amenable if Barack Obama used this song: