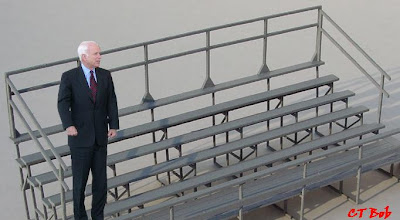 It's a transparent grab for political advantage.

John McCain haughtily announced today that he'll go back to D.C. tomorrow to work on the bailout negotiations, and he wants to postpone Friday night's debate with Barack Obama.

Why is it so important for a senator who's on the Armed Services Committee, the Commerce/Science/Transportation Committee, and the Indian Affairs Committee to inject himself into the negotiations? In other words, why does a senator who has nothing to do with economic or financial committees insist on suspending his presidential campaign to leap into the fray like a half-assed super hero?

1) To look like he's needed in the negotiations. He's not. He has no experience or expertise in these areas. He'll only be needed for his eventual vote, for which he'll have enough notice to get back to the Capitol in time. In a way, it would be great to have McCain back in the Senate, since he hasn't bothered to vote even ONCE since April 8th. That's 109 votes in a row he missed.

2) Photo op and publicity. Of course. Anything to reverse his desperate slide down in the polls.

3) Postpone the debate, for which he's vastly outgunned. He probably isn't getting a lot of sleep lately worrying about it. Plus, he won't have the new darling of the GOP, Sarah Palin, on his arm when he's alone up there on the stage.

It's obvious what he's doing. Desperation is driving McCain to more and more outlandish maneuvers. Everyone sees it.

Really, there are only two parts of the campaign he said he would suspend.

His ads and the debate.

Obviously he is completely unprepared for the economic debate that this situation demands.

As for the ads... Leaves me wondering if he can't afford to go the distance with the $$$ of a presidential campaign. Perhaps he can't afford the flight to the debate, as well? Is his wife going broke because of the financial mess he helped create?

i actually think mccain is a good debater so it would be really stupid to delay it. no matter what, the most memorable parts of 2008 debates will be how biden tears apart palin. absolute massacre.

Reason #4: He's trying to stop the POUNDING he's taking in the polls for (a) his out-of-touch "Fundamentals-are-strong" stance when the defecation first hit the oscillating cooling device, then (b) his wishy-washy "blame greed" screed that followed.

Maybe Obama should propose that -- instead of foreign policy issues -- the debate should focus on national economic issues.

Jeez, Bob -- can you possibly have LONGER passwords?

You want LONGER passwords? Well, OK, if you insist. LOL

If I had any control over the passwords here, don't you think I'd program it to provide phrases like "FUcK buSH"?

If most Americans have the reaction I had when I first learned of McCain’s suspended campaign, it’s McCain’s Death Throes. My first thought was WTF, followed by the thought this is a surely gimmick. No rational explanation exists. Well, in my humble opinion, McCain just blew the wheels off the straight shooter express and it is likely to take up orbit around a far away planet somewhere out there in the Universe. Do we really have endure McCain's stunts for the next 40 days? This has really reached the bottom of the pit.

It's only going to get worse for McCain. The contest is about where it was right after the Dem convention and right before Little Miss Sunshine was introduced as the wingnut equivalent of the Second Coming of Jehovah for the GOP.

Well, the bloom is irrevocably off that rose, and the Post-Palin-Convention bounce is over. Now people are starting to look closely at the kind of leadership that will be best for our nation. Barring any major gaffs by Obama's campaign, the Dems are in the driver's seat for November.

Following the bouncing ball -
McC says that the Friday debate could be moved to next Tuesday, now scheduled for the VP meet-up. Biden/Palin would then be postponed until a *later* date (Christmas Eve?).
I think this is the real goal: Keep Shipwreck Sarah hidden in the bushes or people will know what a convulsively bad choice she is. All the rest is smokescreen.
oldswede

McCain knows he is falling further behind with each passing day and needs a stunt like this to try and right the ship. Desperate times call for desperate measures. I hope the American people aren't fooled yet again!

Just want to make a point. Bob Symmes suggested changing the topic of the debate from International Affairs to Economics. Problem is: Obama understands that the two are intertwined, so much so, that all the conflicts we see now, are based on control of vanishing world resources. McCain sees it in black and white: good vs. evil, us against them, and doesn't have a clue about the economics driving these problems (Georgia v. Russia; Ukraine v. Russia, Iraq,) which is mostly oil and gas.

A simplistic worldview is a hallmark of the Bush administration, and McCain is following along perfectly.