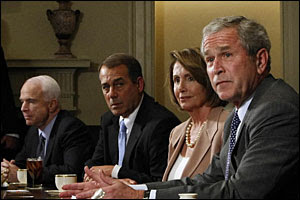 In what is being perceived as a blatantly partisan maneuver, President Bush and House Republicans at this mornings White House meeting presented a bailout proposal significantly different than the one that both parties had essentially agreed to previously.

WASHINGTON (MarketWatch) -- Sen. Chris Dodd, the top Democrat on the Senate Banking Committee, said Thursday that bipartisan meeting with President Bush at the White House on the mortgage rescue plan was nothing short of a disaster.

When the ranking member of the Senate Banking Committee uses the word "disaster" to describe the new plan, you know they changed the agreement Dodd thought they had.

In an interview on the CNN cable news network, Dodd described a meeting in which Democrats were blindsided by a new core mortgage proposal from House Republicans, with the tacit backing of Republican presidential candidate John McCain. "I am not going to sign on to something I just saw this afternoon," he said. Dodd said Republicans and Treasury Secretary Henry Paulson had to decide what they wanted to support. The whole meeting "looked like a rescue plan for John McCain," Dodd said. He said he was simply going to pretend that the meeting had never happened

It shouldn't come as that much of a surprise to anyone. You can't expect this administration to act honorably now when they've blown every single chance they had for the last eight years. THIS is indicative of the Bush administration's unwillingness to work with Congress. And of course, John McCain sat there today like a nodding fool, agreeing with everything the President says without question.

The salient point to remember is that this entire last minute shift by the Republicans may have not occurred if John McCain didn't take it upon himself to try to insert himself in the proceedings despite having zero expertise or experience in these kinds of financial matters.

And don't forget that if an agreement WAS reached today, John Sidney McCain wouldn't have been able to stick with his lame excuse to avoid debating Barack Obama.