Wow, what a surprise!

Today a spokesman from Sarah Palin's staff said she won't speak with an investigator hired by Alaskan lawmakers to look into the firing of her public safety commissioner. 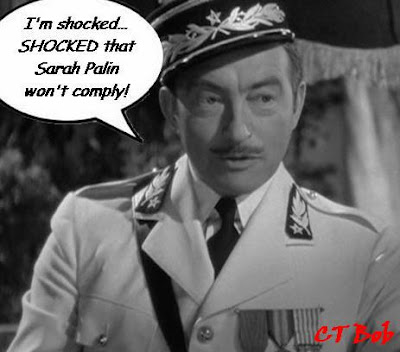 Maybe the ever-dapper Captain Renault has a problem with Palin's reticence, but it comes as absolutely NO surprise to me.

Let's look at the options and see if Ms. Palin might have a motive here:

If I was her and innocent, I'd certainly welcome the opportunity to clear my name and prove to the world that I had nothing to hide.

On the other hand, if I was her and guilty as sin, I'd tell the prosecutor to go pound sand and dare him to issue a goddamned subpoena if he was so keen on questioning me! And even then, I'd stall them until AFTER the November election, because once I'm in office, all it will take is a sudden start, and John McCain is the deceased president and I'm in the Oval Office!

Oh, did I mention that the prosecutor was a Republican? And that he subpoenaed just about EVERY single person who might have even been slightly involved in the "Troopegate" scandal, with the single notable exception of Little Miss Sunshine herself?

Here's a snippet from the AP:

McCain campaign spokesman Ed O'Callaghan told a news conference Monday that the governor, the Republican nominee for vice president, will not cooperate as long as the investigation "remains tainted." He said he doesn't know whether Palin's husband would challenge a subpoena issued to compel his cooperation.

The campaign insists the investigation has been hijacked by Democrats.

Whoa! Are you seriously claiming that the Republican Special Prosecutor, and the hugely Republican-majority Alaskan legislature are entirely cowed by the few Democrats who happen to reside there? Do you really expect anyone to buy that?!?

Jesus. A few brave souls up in Alaska are fighting for the truth to come out about their tainted and scandal-ridden governor, and suddenly it's a partisan Democratic free-for-all.

She's the Denali Queen of Denial.
Have you seen the photo of her with the perfect Dick Cheney sneer? CNN.com has it on the front page now
(9/15)
oldswede

The ReThugs are falling into goose-step...from today's NY Times:

Sheesh! Things are gonna get very sticky for Saint Sarah!