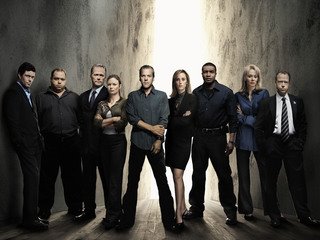 Finally! 24 got the recognition it deserved, winning the Emmy for best drama last night. I have not missed a single episode since the very first when we met Jack Bauer and presidential candidate David Palmer and his deliciously calculating wife, Sherry.

On the Al Franken Show this afternoon, guest hosts Tom Oliphant and Christy Harvey were discussing the appeal of 24. She suggested it was the terror-porn aspect of the show, and he wondered if it appealed more to the right or the left.

They asked if the same people drawn to 24 were West Wing fans. That's me. The common thread in both shows is that there is a fundamental underlying competence in both shows relating to our government. We so long for that in our real government. Instead of praise, the Jack Bauers of this administration get subpoenaed, have their secret identities leaked, and lose their jobs.

When Joyce and I were watching an episode of 24 this season and Jack ruthlessly shot Peter Weller's wife in her thigh to make him cooperate, for some reason it struck me as funny and I started laughing hysterically!

Joyce didn't think it was as funny.

I guess I need to be more selective about the things I find humorous.

But see, that's Jack -- above the knee is less painful and less potentially damaging than the kneecap or below. It's not mindless torture for him to get his rocks off - it was only after every other option was completely exhausted.

Yeah, it really WAS rather nice of Jack to blow a hole the size of a frisbee in her thigh, rather than her knee. What a swell guy. LOL!

I'm glad that, at least, I wasn't the only person who exploded in guffaws at the act; I think it was sheer amazement that he actually DID it! Jack don't play the bluff game; if he SAYS he's gotta hurt you, it would be best to believe him and cooperate.

More at me than at Jack Bauer.