Our Service to the Traveling Public 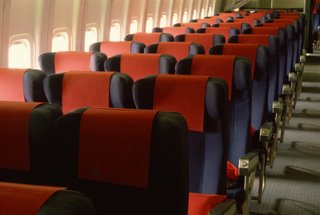 Since the TSA’s new rules (Bill Maher, are you listening?) are a bit complex, we thought that as a service to the traveling public we would provide you with the inside scoop. In this case, it means translating an interview CNN’s Miles O’Brien (a pilot himself) did with Kip Hawley, Assistant TSA Secretary. And remember, Joe Lieberman is taking full credit for creating the Department of Homeland Security.

M. O'BRIEN: This whole notion of liquids…goes back to 1995 to blow up airliners, originating out of Asia, coming into the United States…This is not new. This is -- this is pre-2001, pre-9/11 stuff. And yet, suddenly, a knee jerk response to a foiled plot in Great Britain. We're saying now we should take liquids off. Why?
HAWLEY: No, the threat is very real of any kind of explosives. And there are many kinds, and certainly we know about liquid explosives. [CTB: we found the memo after the Brits moved in last week] We have, in fact, the technology to detect it. The issue for the bottle scanners, so to speak, is that it's not efficient in that you have to scan one bottle at a time. [CTB: and keeping the airlines from bankruptcy and blowing threats off for convenience’s sake to keep people flying is our main goal] So, it will not be the immediate fix to get a piece of technology.

M. O'BRIEN: Well, why -- why have -- why weren't the liquids banned after 1995 until such time as technology became evident that would protect people?
HAWLEY: It was a risk-based approach. [CTB: we couldn’t figure out a really good political hook for this until Lieberman lost in the primary] And the liquids in this form is a novel approach. [CTB: somebody must have read it in a spy thriller] It is different from before. And we do have, in fact, training for detecting liquid explosives [CTB: on Friday afternoon during screener training, for a half-hour], and it is part of the package that we have had in place for a long time. [CTB: we just don’t do it] The -- there is a novel application of this that we wanted to assure the traveling public of their safety. So, in focusing just on the safety piece, we decided, let's not take any chances and for right now ban liquids. [CTB: so that we can raise the level of hysteria and own the news cycle for a while when cable news could be talking about Lamont’s victory and the anti-war sentiment in America]

M. O'BRIEN: All right. But as a member of the public, as someone who flies, I look at the way -- and it's not just the U.S. -- the way we collectively respond to these threats, and it seems like a knee jerk reaction after the fact. [CTB: I’m trying to do my best here not to laugh]
HAWLEY: Well, in this case it was an immediate aggressive reaction to ensure the safety of the public. [CTB: and jack up the hysteria factor] And that was the only consideration. [CTB: and if you buy that, I have some swampland to sell you] And while there is a good likelihood that we could pick up someone who is on that kind of a mission, this is not a matter where we want to deal with likelihood. We want to be absolutely sure of the safety of the traveling public, and that's why we took this strong action. [CTB: But we will still let you carry on a 4-inch blade in a pair of scissors, but deadly mascara is off limits]

M. O'BRIEN: All right. A final thought here. The amount of money spent per passenger on airline safety is tremendous compared to other modes of transportation … Can you say right now, do you feel confident the distribution of money, time and effort is appropriate, or is our mass transit system really vulnerable right now?
HAWLEY: Our mass transit system is a very high priority for us. The disproportion in the budget relates to the fact that we -- we provide the salaries for all of the screeners around the country. And if we were to do that in the transit system from the federal government, it would be something like 688,000 people [CTB: let’s see, at a $40K/year package for each employee….that would be $27 billion a year… or less than three months of spending to support the mess in Iraq]
O'BRIEN: Wow.