Clinton said that, contrary to Lieberman's claims, the lawmaker's position on the Iraq war was one not shared by many of his fellow Democrats. The former president described Lieberman's stand on the war as, "I want to attack Iraq whether or not they have weapons of mass destruction." 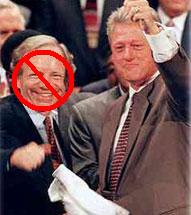 "His position is the Bush-Cheney-Rumsfeld position," Clinton continued, "which was, 'Does it matter if they have weapons? None of this matters. ... This is a big, important priority, and 9/11 gives us the way of attacking and deposing Saddam.'"

"Well," he told reporters, "if I were Joe and I was running as an independent, that's what I'd say, too... But that's not quite right. That is, there were almost no Democrats who agreed with his position."

Clinton indicated that most Democrats who voted to give President Bush authority to use force did so to persuade Saddam to comply with U.N. weapons inspectors, and were not advocating an invasion.

Clinton also maintained that, despite statements by Lieberman and Vice President Dick Cheney to the contrary, a vote for Ned Lamont was not made at the sacrifice of national security.
Posted by CT Bob at 8/15/2006 11:00:00 PM

I hope this is just the beginning. I am on vacation (in upstate NY with conservatve family members, which is why I am nline getting a fix of sanity) and I would enjoy watching the dems come out fighting.
UptownNychick

I think you can count on the fact that more and more bigtime Dems are gonna start trashing Joe. It's gonna get ugly for him.

I think what former Pres. Clinton said is great, but part of me wishes he hadn't been so buddy-buddy with him during the primary since we all knew Clinton (and the remaining Dems) would abandon him as soon as he lost. That's not to say I feel bad for Joe because believe me, I don't!

Yeah, I was a little disappointed in Bill's support of Joe, but I think he was politically obligated to do so. Hillary and the rest of the Dems pretty much demanded it. The "Incumbants Club".

I also felt it was a kind of half-hearted endorsement, like he was doing it because he HAD to, not because he WANTED to.

Now that he's backing Ned, I get the feeling that he really means it. I expect we'll see a LOT of former Joe supporters rallying around Lamont shortly. Barbara Boxer has ALREADY offered to come to CT to campaign for Ned.

I almost feel bad about how she looked on my video...almost, but not really!

Bob, someone should made an ad with the "revised" picture of Joe and Bill showing the crossed out sign over Joe's face! That's really gave me a good laugh!

I think Bill speaking for Joe hurt him with the same people he is now trying to court. I think when Billl comes to endorse Lamont, we should hit Joe hard with his many flip-flops and remind his Repugnant and Ind. friends how he was begging for some Big Dawg just a few months ago.
JOE IS A PATHETIC LITTLE MAN.