This guy is a genius! 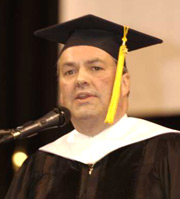 House Speaker Jim Amann obviously has all the answers.

He must be smart; just look at that picture!

Amann can tell that Joe Lieberman is a better politician than Ned Lamont, because he carefully researched the two candidates.

In this article from the Conn Post, KEN DIXON (dixon.connpost@snet.net) wrote:

BTW, thanks a lot ConnPost for labeling Lamont an "upstart". Jeez, you guys just can't stand the fact that he's the properly selected Democratic nominee, can you?

...Amann said that he doesn't know Lamont beyond the fact that he's against the Iraq war and he's a multimillionaire with inherited wealth from Greenwich.

Wow, I hope your impressive millivolt intellect didn't overheat your brainpan figuring THAT ONE out!

Would it have killed you James, to actually TALK to Lamont and learn about his positions on the issues, before running home to Daddy? Oh yeah, that's right, I almost forgot...Ned didn't CALL you personally. You'd think with all the spare time he has right now, the very first thing on the rightful Democratic Nominee's list would be to call a lifelong Democrat and BEG for his support.

After four telephone conversations with Lieberman — the loser by 10,000 votes of last week's primary — Amann, D-Milford, decided to stick with him.

Holy shit! Four phone calls is all it takes to get your endorsement?

The telemarketers must have a big gold star next to your listing in their calling directories; all they have to do is phone you a few times, and suddenly you're getting your carpets steam-cleaned, your kitchen cabinets refaced, and your house stuccoed. Sheesh!

working for the elderly,

No Child Left Behind...

Iraq is the single biggest cause of disabled veterans this century

and working men and women.

against raising the minimum wage.

I'm still hoping he smartens up. There's a good chance he'll learn the error of his ways.

At least, I hope so...I'd hate to have to run against him in two years!