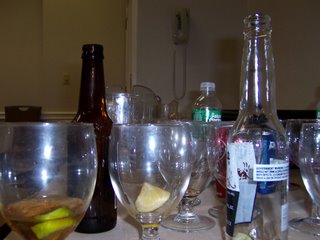 This will be our last post for tonight. I, Kirby am home, and we left CTBob to party the night away with the rest of BlogNation at the Lamont party. Before I left, though, I brought Maxine Waters from the ballroom to the blog room -- it was just terrific. The respect for us is amazing. We are the new precinct captains.

The gal second in command for media tonight was in the middle of the ballroom when Ned came off the podium, and her phone rang. "Hello, this is Senator Kennedy, and I would like to personally congratulate Ned!" She scrambled to get her phone to Ned right away.

No gloating, just deep felt satisfaction that we.won.one. A couple of days to let the dust settle and see how much pressure Lieberman gets to go away --- and take a couple of cleansing breaths.

The earthquake shook about 11:15pm Eastern time -- tsunami warnings are up for the AM.

Our bet is that all the Ds in office will be running to make Ned their new best friend -- with the excuse that they had to back the convention nominee, but they really loved Ned all along, and maybe he can immunize them on the war. Word on the street is -- is there a prominent D who would even be seen with Lieberman now? Too late for him to become R candidate, but if the Rs can kick their candidate, Schlesinger, they can cross-endorse Lieberman, and he would be on the line with a very popular incumbent R governor.

Here, as a coda on the day, is what the blog room looked like while Ned was on the podium times the 5 tables we worked at 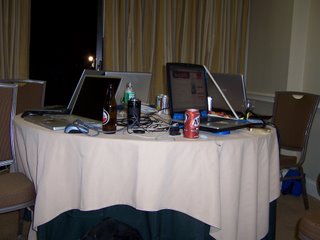 kirby, bob, thanks so much for all your hard work.

enjoy this victory -- they are so few, and this one is REAL!

Nice job, Bob. If you have a chance, check out my thoughts on what this all means on a fellow blogspot blog,
Nettertainment: Change!