Joe won't give it up, no matter WHO he hurts. He seems to be suffering a pathological need to hang on to his Senate seat, regardless of the consequences.

In addition to the hotly contested Senate race, where Ned Lamont beat Joe Lieberman so soundly that Joe scurried away from the Democratic party like a wounded opossum, there are three Republican House seats that are up for grabs this November.

And we all know that Joe Lieberman's selfish grasping at the vestiges of his Senate career will hurt the chances of these Democrats.

Joe was quoted in the Hartford Courant when asked who might dissuade him [from running], Lieberman smiled and said, "There is no earthly messenger."

To him, this isn't about politics anymore. 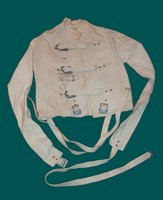 I'm starting to wonder if Lieberman is showing signs of an undiagnosed mental illness. He certainly seems to have lost any sense of proportion regarding this race. Now it's a matter for the Gods to decide, apparently.

wow. No earthly messanger? That sounds an awful lot like his boyfriend before deciding to go to war in Iraq.
How arrogant.
Peace
UptownNycChick

CTBob- maybe you can help with this one- I'll quote my first comment- links are to further discussion:
---Sorry if this has been addressed before- but wouldn’t Joe have to “unbecome” a Democrat to run as a candidate on another party ticket in CT? Once the petition sigs. are approved, how can he legally in CT be both a member of the CTforLie party and the Democratic party? Surely he has to vote for himself as a member of the CTforLie party (registered member) and not a Dem?---

I think the bigger question to ask Joe is -- Will he pledge to actively campaign for the 3 Democratic challengers, and against the Republicans and yes against Rell too?

Joe needs to answer this question.

Actually, anonymous, that's a great question, and one we need to jump on. The person to ask would be Lowell Weicker -- he started "A Connecticut Party" when he ran and was elected as an I governor.

Kirby, anon in this case is Valley Girl, an FDL mainstay who was here for the big Primary push (she signed the post "VG", which is how I know it was her).

I don't know if Lowell "unbecame" a Republican to run for Gubner as the "A Connecticut Party" candidate.

But the rules regarding third (actually "fourth") parties in Connecticut require a three-word name. Since there's already an Independent party and the Green Party listed, I think the rational for making your new party's name begin with a letter near the beginning of the alphabet is because those parties are listed alphabetically.

So, Lowell's "A CT Party" would be listed first, after the usual parties.

And this might explain Joe's choice of the "Connecticut for Lieberman" party, rather than "Lieberman for Connecticut", which conceivably could be listed after the "Dingleberries For Buttwipes" party; the "Fartknockers For Fascists" party, and the "Lick-asses For Bush" party.

I'm sure Joe was worried he'd get lost in the shuffle.

Or he selected "CFL" because he's an unconscionable egoist who believes his Senate seat is his for life.

cmon bob. lieberman isnt mentally ill. u took that wayyyyyyyy out of proportion. he isnt going to drop out. period. just a differnet way of saying it.