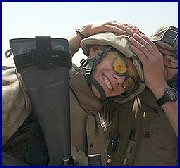 Please pray for Jordan Pierson and his family. The 21-year-old Corporal was killed in Iraq on Friday, August 26. He's from CT Bob's hometown of Milford, so I'll defer to him for more information.

Bob: Thanks, Kirby. I do have something I'd like to say about this tragedy.

This is kind of difficult for me, because I can't help but think of the loss that Jordan's little brother is feeling right now.

You see, I lost an older brother to Leukemia many years ago, who at the time was roughly the same age as Jordan. I remember the feelings of anger that I felt at the time; at God, at the world, at the entire universe for taking someone I loved and looked up to; a person who was kind, intelligent, and showed so much promise for the future.

But, eventually I came to realize that what happened was something that was more or less explainable. A terrible disease which had very little treatment success at the time stole a young man's life. No act of man was responsible for his death; it was senseless, but at least it was one of those random acts of God that happen to innocent people, like getting struck by lightning.

Jordan's death however...that really bothers me. He died because he did the honorable thing; he put off his education at college to join the military and fight for his country. If I was Jordan's age immediately after 9/11, I doubt that I'd have wanted to do anything different myself. We were attacked, and we wanted to punish those responsible.

But as the reasons for the war in Iraq become more and more well known, it seems that our leaders had lied to many young people like Jordan; they misused and wasted the enormous potential and lives of thousands of promising young men and women, and for what?

If our top leaders had the courage and honesty that people like Rep. Jack Murtha possess; and they recognized and admitted that invading Iraq was not only wrong, but was made worse by our staying there, many young people in the prime of their lives like Jordan might have been spared.

I can't help but worry for Jordan's little brother. It's bad enough to lose a brother to a disease you can't do anything about...it might be infinitely worse to realize that you lost him because our nation's leaders betrayed us.
Posted by Kirby at 8/27/2006 06:17:00 PM

I was in ohio last Spring on business and went for a walk early one morning. I came across a man out in his front yard, which was covered with tiny little American flags. He was placing another. I asked him why and he said he put one out for each soldier killed.
Looking at all those flags, I was overwhelmed by how many there were. How many families were torn apart, how many mothers and fathers had their worlds crushed, how many children lost a mother or father, how many brothers and sisters lost their best friends.
We've not only lost too many young men and women, we've torn apart families and created terrible social problems for years to come.
It's so sad.
UptownNYChick

If our top leaders had the courage and honesty that people like Rep. Jack Murtha possess..

Speaking of Murtha, I don't understand why he hasn't come out strongly and vociferously for Ned, who is fighting his battle.

alsobob, I think Murtha will help at some point, but I'm sure the campaign will wait for the right time.

We've still got 10 weeks to go until the election, and something tells me they're working on some big things at Lamont HQ.

I don't think anyone is happy about this war, however I support Jordan and his family. He was fighting for our freedom. Remember these are our children and we have to support them. My nephew Mark is in the same Charlie Company and he has to know we are behind him whatever he chooses to do. God just let this end soon!
JV
Milford

JV, I agree with you 100% about supporting our troops, and I'm sure Jordan enlisted for the very best of reasons. Our brave military has been placed in a no-win situation as a result of poor leadership.

The sad fact of the matter is that our administration lied to us about the reasons for getting into this war, and they continually insist we need to be there. I feel they are directly responsible for the deaths of good people like Jordan, and if we sit by and do nothing, they'll never have to answer for their actions.

The absolute tragedy about this is the waste of young people's lives because our leaders have failed us.

We can best support our troops by getting them out of harm's way; out of a war that Bush/Cheney created to make themselves rich. It was a mistake, and they're letting people get killed every day because they can't come to terms with their mistake.

And I agree completely with your last statement "...just let this end soon!"

That's why we're working so hard to see ethical, compassionate candidates like Ned Lamont replace those chickenhawks like Joe Lieberman.

Joe Lieberman, who skated through the entire Vietnam era on at least FIVE draft deferments, while other brave yet less-fortunate young men fought and died for our country!