I just got home from work; did a lot of driving today. I'm also trying to catch up on my emails and the blogs, but I think it's gonna be a few days before I'm back up to speed on everything. 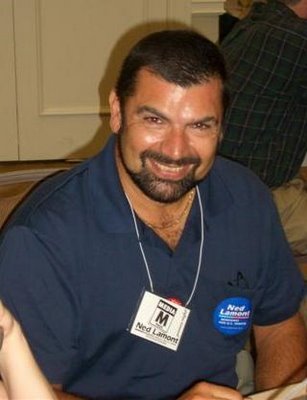 This was me savoring the victory in a rare moment of quiet; right after this, I probably quickly finished what I was working on and then scurried off somewhere to shoot more video. Boy, do I look tanned in this picture! I fully expect to tan even more over the next few weeks on my sailboat.

Last night was a sweet win. The entire day, from my first post around 7AM until my last sometime after midnight, was a tense, excited and hectic time. Being in the grand ballroom when Ned appeared for his acceptance speech was possibly one of the highlights of my entire life.

When Ned wrapped his speech with his trademark "...I'm Ned Lamont, and I approved this message," the entire crowd started chanting "So Do We! So Do We!" while pumping their fists in the air. It was amazing and very moving.

I do have one complaint, though; if I ever find the bastard who invented foil confetti, I would enjoy introducing him to my fist. Repeatedly. That shit gets all stuck in your skin, down your neck, in your ears; and it itches like hell. Why not PAPER confetti, you knucklehead? Jesus Christ, out of all the things in the world that can stand improvement, PAPER CONFETTI wasn't one of them! Cure cancer or something, genius.

Anyway, I wasn't going to let metallic shrapnel-laced confetti ruin my night, and I was proud to have the foresight to cover my can of Amstel Light with my hand when they began peppering the crowd with it, so I remained in a good mood. Filming Ned coming down off the platform, he shook my hand while I tried to videotape him; and you can't hear it, but I was yelling "Thank you for winning, Ned!" as he greeted me.

It was really great back in the blogger's War Room. We had the TV going and people were laughing and hooting at the replay of Lieberman's concession speech (which was really more of a "Fuck you, Democrats" speech, in my opinion) and simply relishing the victory in great company. I've never seen more smiles at one time in my life.

Maxine's visit was awesome, and it really makes us proud to know that the politicians are starting to recognize that we ARE making a difference and contributing to the efforts.

There were a certain amount of MSM people wandering around the war room during the evening. Eventually they started getting annoying, and as a reporter sat next to me while I was frantically editing a video, he kept asking me questions and breaking my concentration. Finally I stopped what I was doing and said, "Look, we're journalists here too. How would you guys over in your media room feel about being asked questions while you're scribbling in your little notepads and typing in your computers?"

He was quiet for a moment and then said, "Good point," and got up and left. A little later we ushered all the media out of the room and had a brief closed-door discussion about whether or not to allow the media access. Several people at first were in favor of letting them stay, but I spoke up and said that their endless questions were a distraction and that we're here to do what we do, not be a part of some reporter's story. Then Tim spoke about how the MSM has almost never made us look good in a story anyway, and by then most of the people began voicing agreement about keeping them out unless we absolutely didn't mind.

Much later, after the results were official, they pretty much had complete run of the place. Most of us had slowed down on the heavy work (not Kirby though...) and were free to chat with the reporters. Editing that final video of the night was a little bittersweet for me, because it signaled the end of what had been the absolute best day of blogging I could ever have imagined! We pulled something like 50,000 hits during the course of the day, which for a little blog like this is absolutely amazing.

All the work and all the worry paid off in the end, and we had fun doing it. Again, I can't properly express how awesome Kirby and her hubby Bob were during the course of the events, and you'll be seeing a lot of Kirby posting on "Connecticut Bob" in the future.

After I packed up and loaded up the car, I went back in and started wrapping up with people. As I mentioned, we gathered briefly in Branford Boy's suite for a quick nip o' fine single malt, and then I was on my way back down the elevator.

I exited the lift, poked my head one more time into the war room, said good-bye to anyone I recognized in there and quite a few people I didn't, grabbed a slice of pizza that was just delivered (how do you get great pizza delivered at 2AM?) and walked out of the room.

Halfway down the hall I had a thought, turned around and went back to the war room, and grabbed the Bloggers Media Room sign for a souvenier. A Lamont staffer saw me, then turned to the door of the Regular Media Room and snatched THAT sign! We grinned at each other and walked away. 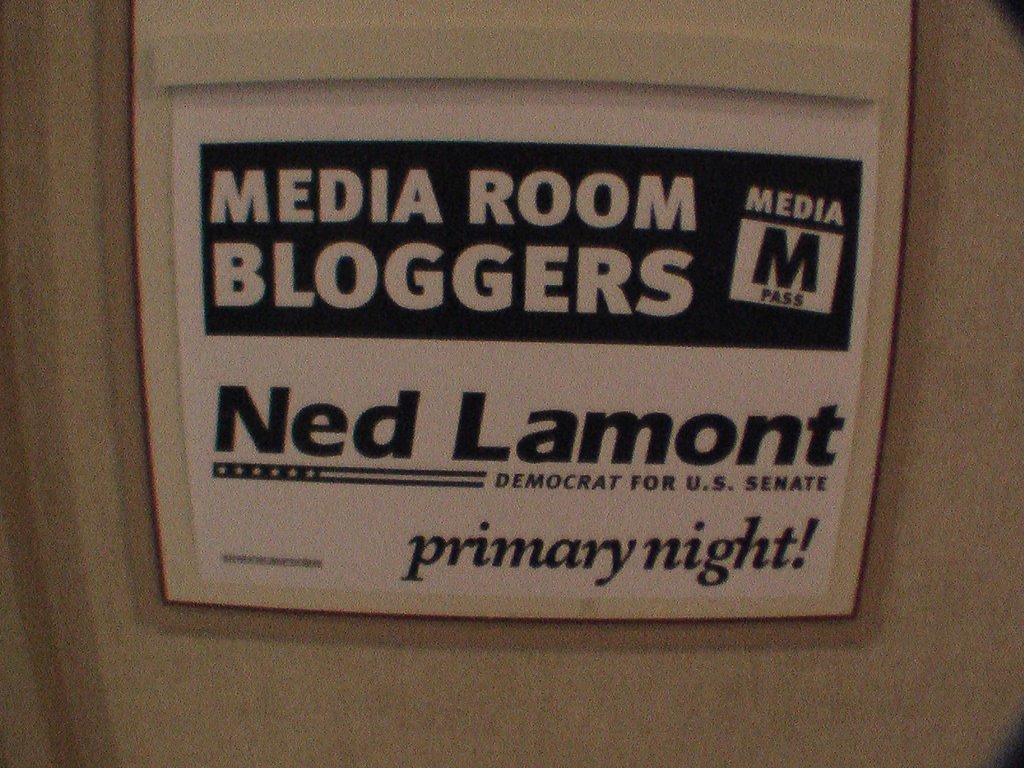 The list of local bloggers to whom I owe a debt of gratitude is huge and endless, so forgive me if your name isn't on here. I'm tired and want to get this posted before the 7PM Blogger outage:

CT Blogger, Spazeboy, Branford Boy, DeanFan84, T.Party, CTKeith, Jon K, Maura, Scarce (we're going to find you someday!), Neal F, JoeMentum, Dad (KISS float), and a bunch of others I'm too brain-dead to list right now. Of course, Jane Hamsher of Fire Dog Lake was one of my inspirations for getting into political blogging in the first place, and rest assured, I will never forgive her for it!

Everyone else, please don't hate me...I'm so tired I'm seeing double right now; I really appreciate all the work you've done (that I steal regularly).

Tonight I have to make one last trip, back to Sullivan's to say farewell to anyone who's leaving CT, and also to drop off my mini-documentary tape with the BBC guys. I'm sure I'll be enormously embarrassed by the documentary they're going to put together and release some time in December, but I'll deal with it then. They have a lot of jokes that I made about them to get even for.

For now, for me tonight, this is gonna feel sort of like the circus is leaving town.

Bob, you did a great. Thanks. A very moving experience, looking back over it all, and funny as hell. You really put your heart into it, and you put yourself right in the center of all the action. That made it much more real for us out here.

Thank your wife for us! That was very gracious of her to assume the burden of not having you around when she probably wanted you around.

a great job, i mean!

Thanks Bob for a former Milfordite. I just found out that both my parents (Milford residents) voted for Lamont and that was completely unexpected.

Enjoy your time on the boat!

Bob, I found you site just this week. After working a few days in Ct. for Lamont, I had to work Tuesday night. I used your site to keep up to date on the race as I worked.
Thanks for letting me feel the excitement of the moment, keeping me informed and making me laugh.
UptownNYChick.

Bob, thanks for all your work from Lamont's HQ, it was awesome and I felt like part of the action.
-bwp

I've been enjoying my daily Connecticut Bob read since June. Wonderful job you've done with this site. Hope you stay "on the air" through the election in November.

By the way, I saw Ned on Hardball a few minutes ago. Not only Senatorial, but also sincere, forceful and refreshingly honest. Would he have the time to give a few campaign lessons to other Democratic candidates around the country?

Hope you get to enjoy some down time.

Sorry 'bout the label...and I didn't think you'd see it! But it WAS late and I'm STILL tired, so you'll forgive me.

Everyone, I had an awesome covering the Primary, and you can count on it that I'll be there on election night in November. And pretty much there between now and then for that matter.

Ya.. I was wearing a "Staff" ID... I guess you might call me a Staffateer. I just got a blogger account to leave messages on LamontBlog.. so I figure I'll use it on here too!