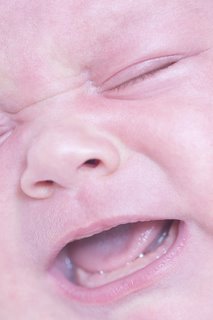 UPDATE: Go check on CTBlog's project on this appearance! You rock!

Oh, spare me Joe. He was on Face the Nation yesterday -- and the transcript simply does not do this performance justice. You can see video clips from the Face Web site (transcript link) or watch the whole thing at Politics TV Particularly notice the sweat accumulating on his upper lip as the interview goes on.

Ten people went to the New Haven Democratic registrar of voters petitioning for Lieberman to be removed from the Democrat roles since he is running as an independent and there is no such thing as an "independent democrat." The registrar is said to be taking it under advisement. [I still can't get a straight answer about his registration if running as a third party candidate -- anyone have the law?] If the registrar was even there -- the big excitement in New Haven this week is that Uma Thurman and Pierce Brosnan are in town to film a movie.

It's a statistical casualty in the blogosphere. It hasn't been updated since prior to the primary election, and like most blogs will probably fizzle out completely very soon.

The CTBlogger.com "about" page clears up some of the confusion:
"As a quick note, it turns out there’s a fairly famous blogger who goes by CTBlogger. I wasn’t aware of that when I registered the name, so I don’t want anyone to a) think we are affiliated, or b) think I’m trying to screw him over. This idea hit me out of the blue and it’s the first name I thought of for my site :) ."