From this article By DAVID LIGHTMAN, Washington Bureau Chief, in the Hartford Courant:

...Lieberman insisted there is no New Joe-Old Joe dichotomy.

"I think I stayed who I have always been throughout my Senate service," he said in an interview Friday. 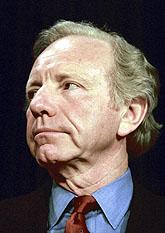 But nine longtime Lieberman friends - many of whom would not let their names be used out of concern for their relationships with the senator - said otherwise.

"I don't think he's operated in the last few years the way he operated earlier," said Norman Ornstein, an analyst at the American Enterprise Institute and longtime Lieberman friend. "He hasn't cut people out, but there used to be more dialogue with others."

Lieberman has long balanced two forces in his public life: his faith and value system, which provides the underpinning for his views on many topics, and his political instincts.

But in recent years, the moral side had been gaining prominence and the political acumen seemed to be fading. The old gang is not certain why that happened, but in conversations with nine people from this crowd, they almost uniformly said Lieberman was deeply affected by an accumulation of personal and public setbacks unlike anything he's known in his 64 years.

Some of these friends said no one can know how Lieberman still deals with the blow he suffered in 2000. His vice presidential run was the perfect validation of all he had worked for.

Lieberman hoped his campaign would gain him his party's respect - and strong support - as the Democratic 2004 presidential front-runner. He again thought that his vow to stick by his moral code, this time by not formally entering the race until Gore made up his mind about 2004, would help that cause.

For the first time in his public life, that political logic went haywire. By 2002, Democratic voters were raising serious questions about his support for the Iraq war, and the next year, even Gore left Lieberman's side, endorsing not his loyal lieutenant, but Lieberman nemesis and anti-war hero Howard Dean.

Lieberman was deeply affected by the presidential campaign, unable to fathom how Democrats he had courted all his life could so starkly reject him.

"That race was very different from the unbelievable events of 2000," he said. "This was a time where my party was heading in a very different direction, and I thought I was right.

And I refuse to change when I believe the position I was articulating was right."...

That, I feel, is the core problem with Joe Lieberman. His inability to believe that anyone with a differing opinion can possibly be correct. Lieberman suffers from what is sometimes referred to as an "infallibility complex", where he can see no merits in a position that opposes what he believes.

His unbending stance on our continued occupation of Iraq is a prime example. For him to admit that it was wrong to invade Iraq, and it's wrong to stay there indefinitely, would be impossible. He's too emotionally attached to his position, and he can no more change that position than a leopard can change its spots.

There was another aspect of the final day-before the primary, day-of and day-after you overlook in this article.

Joe Lieberman's campaign website went down, and the candidate, campaign manager and others not only publicly accused supporters of the opponent with engaging in denial of service hacking, but made sure that on election day this news was mixed in with official complaints to the AG, Chief State's Attorney and FBI.

Where did the new staff fit into handling this emergency, and who decided to turn it into a final desperate effort for votes?

Heres a good article with a timeline of quotes from Joe

ctgc - yeah, I'll be looking for the results of the AG's and FBI's "investigation" into this. I'll be amazed if it didn't turn out to be the Lieberman staff's complete lack of internet know-how that led to their self-immolating website problem.

And I'm curious to see if the AG will come down on them for filing a false report. Or if they'll apologize to the Lamont campaign and to us bloggers.

Because I know that for me, personally, I experienced pain and mental anguish over the allegations, depriving me of sleep and making me depressed. I can't even LOOK at a computer without feeling scared and lost.

And it made my dog crap on the rug. (is anyone from the legal profession taking notes?)

OK, I'm just making that up.

scott - thanks for the link. Sirota's on top of it, eh?

I thought the amazing thing about that article was the number of psychological parallels between JoMo and Bush (and yes, I do play a psychologist on the internets tubes):
His emotional attachment to his mother
His dependence on a small circle of intimate female advisors, his mother, his wife, and two political surrogates.
His ever shrinking circle of cronies who tell him only what he wants to hear.
And especially his deluded conviction of his own rightness, and righteousness, wrt the war. There are at least three quotes in the article--"I believe I'm right" "He's convinced he's right" "He thinks his position on Iraq is the correct one", etc--about his stubborn indifference to facts.

No one is examining whom I consider to be the biggest, by far, influence on Joe: his wife. Especially regarding middle east/"fight 'em there" matters.
Like bush, its a religious thing with joe and the wife. And don't get on me for being anti-Israel, as I'm not. In fact, I've always admired their bravery - just not to the point of putting their country on the same plane as our own in terms of defense, as joe and bush do. Dangerous policy.

CTBob -- you may not have a dog, but I have four. I think this can work.