UPDATE: I just found out (11:15AM Sept. 1st) that John Mertens hasn't been added to the Senate ballot yet; a contact at Sec. of State Susan Byzwehiczhsihckzeks's (sp.?) office just told me that so far he hasn't had enough validated signatures to earn a place on the ballot. If this changes, I'll update the blog again.

(Unlike Lieberman spokesguy Dan Gerstein, I will admit my mistakes BEFORE everyone in the entire free world points them out to me!)

Does anybody know the name of the candidate who is running for Senate in the "Connecticut For Lieberman" Party?

Here's a hint: he loves getting lingering hugs and quick, wet kisses from Republicans.

(...and I'd like to apologize for that intense mental image.)

What I want to know is...why the HELL are people calling him an Independent?

The Independent Party in Connecticut already HAS a candidate in the Senate race. His name is John Mertens. He's a tenured Associate Professor at Trinity College. He is also, from what I gathered from his website, a nice guy and an earnest candidate. 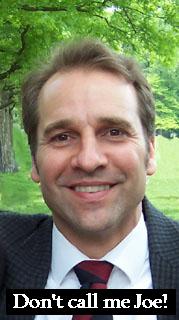 But what counts is that John Mertens is the endorsed candidate of the Independent Party in CT. That much is clear.

Why don't they represent Lieberman as the candidate from the "Connecticut For Lieberman" Party?

Take a look at these examples - this first image is the banner of the "Independent Party of Connecticut":

This next image is what Joe Lieberman's "Connecticut For Lieberman Party" banner would look like if their staff had a sense of humor:

Here's a prime example of this misrepresentation. The Zogby International poll has recently been calling Connecticut voters and asking this question among others:

"If the election for Senate were held today and the candidates were Democrat Ned Lamont, Republican Alan Schlesinger, Independent Joe Lieberman, Green Party Ralph Ferrucci, and Independent Party John Mertens, for whom would you vote?"

Zogby names every single candidate and their party accurately EXCEPT Lieberman's. Why is that?

This misrepresentation that Zogby and others continue to perpetrate seems to call their motives into question. Is there a reason that certain organizations won't use the proper name "Connecticut For Lieberman" when referring to Joe's desperate campaign to stay in office?
Posted by CT Bob at 8/31/2006 01:17:00 PM

I'm a huge Lamont support, and think Joe Lieberman's ego-driven vanity campain just shows what an ass he really is (and I think the Democrats ought to throw him out of the party), but... this schtick about how "they can't call him an independent because there already is an 'Independant Party'" is a bunch of hooey.

"Independant" is -- historically --what we have always called people who run for office without the backing of an "established party." Mostly that meant Democracts and Republicans, but there have always also been some established minor parties -- the Socialists, the Libertarians, the Greens -- and "independent" is (and has been for as long as I can remember) what we called people who ran for office without any established party (major or minor) behind them.

The fact that a few folks in Waterbury decided a couple years ago to start a party and call themselves the "Independent Party" -- well, so what? Does that mean that if I start a party called the "Fighting for the Working Class," then Ned Lamont can't no longer say that he's the candidate fighting for the working class? Or if I start the "Feminist Party," does that mean candidates can't run as Feminists anymore? There's a reason you can't trademark a generic term -- just because someone filed a form with the Secretary of State's office doesn't mean we have to change the words we use. Joe is running as an independent -- the Democrats rejected him, the Republicans seeing him on the side but won't commit, and God knows "Connecticut for Lieberman" isn't an established party.

I think the whole thing a silly distraction from what should be a serious campaign, and it makes our side look silly to keep harping on it.

So let's get back to the important stuff, shall we? -- Seriously, was it a sunrise, or a sunset? :)

(No, more seriously -- the thing yesterday was about Dan Gerstein being a lying sack of ****, and getting called out on it. Man, I love it when that happens!)

When you go into the voting booth this November, there's going to be a name next to "Independent Party", and a name next to "Connecticut For Lieberman". I want people to remain aware that Joe isn't a member of the "Independent Party"; and the more they think of "Connecticut For Lieberman", the more likely they are to come to the conclusion that Joe is a relentless egomaniac who lost his moral compass years ago.

THAT'S why I'm making a big thing about it.

Alright Bob, you can have your fun...

But keep in mind CT has a law requiring unaffiliated parties to have a three-word name. So you'll have to call it the "Relentless Compassless Egomaniac" Party.

Myself, I'm thinking about starting the "Happiest Aggressive Interrogator" Party!

Had an idea today for the KISS float. Maybe you can find a way to have music coming out of it from time to time.

Heard Kelly Clarkson's "A Moment like This", where the chorus goes into:


Sure would put new meaning to Bush and Joe kissing.!! :)

addie, the 'indie' point is less about the 'Independant Party', its existence, and any candidates therein, than it is about referring accurately to the line on which JIL is on the ballot. He is neither independent nor 'unaffiliated', nor any other comparable word. He created his own party, the "CT for Lieberman" party. Any and every reference to that party name and affiliation, IMO, drive home the egomaniacal origins for that name and that 'party'.

As per my previous post while Bob was on vacation, it should be Lieberman (LIE-CT)

Just another point of mistake: Is Connecticut for Lieberman a party of one? He is not a member unless the law changed to allow you to be a member of two parties. How does one find out if there are any members at all in this party? How does someone who isn't a member nominate himself as a candidate? Just wondering.

Actually, it's a party of none. But "Party of One" makes for a snazzier button!

Looking for registered general contractors in texas at http://doityourselfpro.com/. Well I recomend This Site. Maybe your asking who am I